Sun shining down upon the nearly five-foot wingspan of the great egret illuminates the pure white feathers of this bird.

Because its stunning plumes were used as decoration in the hat making trade, the great egret was almost hunted to extinction in the late nineteenth century. The near extinction of this and other wading water birds set the bird conservation movement in motion, leading to the establishment of Audubon chapters across the country. 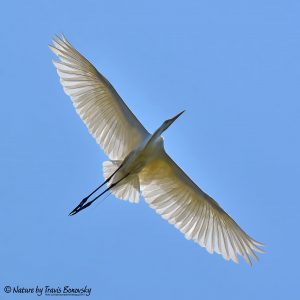 Wildlife photographer Travis Bonovsky explains how he captured this image. “This past summer I spent more time visiting a natural area close to home. The area doesn’t really have an official name to my knowledge, but consists of two large ‘retention ponds’ just south of a golf course. The area was beautifully restored with native plants, shrubs, and trees some years ago and is now attracting a nice variety of urban wildlife including birds, insects, and more. In late July, this beautiful great egret took flight from the water and circled just above me!”
–Nature photographer, Travis Bonovsky